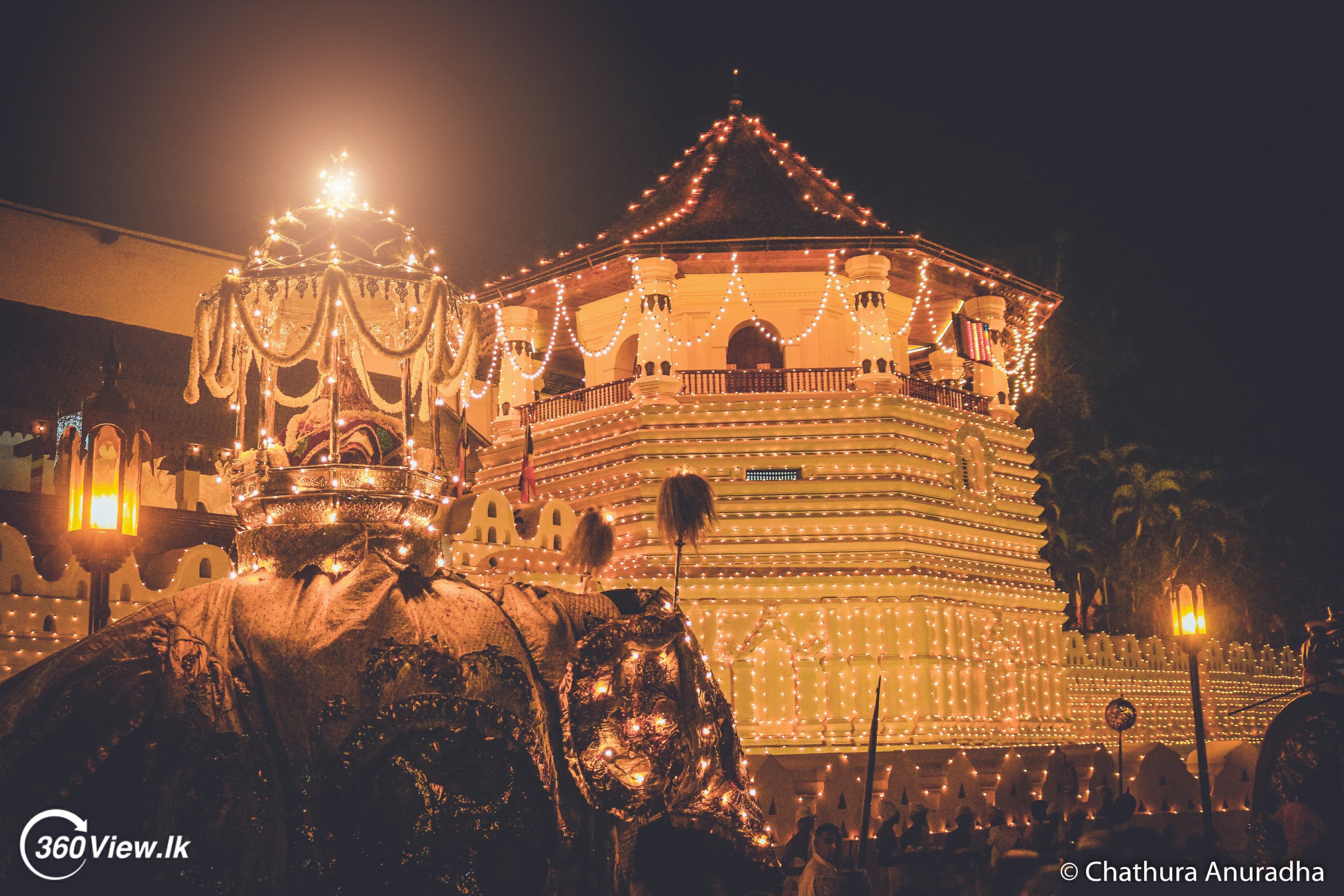 The Kandy Esala Perahera is one of Sri Lanka’s most famous festivals which take place every year in the hill capital Kandy in the full moon of Esala concurring with July or August. It is held to seek blessings for a good harvest from the deities that is around ten days of increasingly frenetic activity end in an ancient,awesome procession that for centuries has drawn religious devotees and more recently tourists to Kandy’s narrow hill streets.

Signaled by thousands of Kandyan Drummers, a host of majestic elephants which embellished in richly embroidered cloaks are led by the brilliantly caparisoned Maligawa Tusker. Decorated from trunk to toe who carries huge covering that shelters, a replica of the cask containing the sacred Tooth Relic of Lord Buddha

The Esala Perahera actually comprises of five separate Peraheras which is four from Kandy devales to the deities with order of precedence maintained throughout. Headed by Dalada Maligawa Perahera, the second is to Natha, deity of special importance to Kandy that believed to be Buddha in waiting. The Third is to Sri Lanka’s Guardian Vishnu also one of the three great Hindu gods and an important figure in representing the crossover between Hindu and Buddhist beliefs. Fourth and Fifth Peraheras are from the shrine to god of war and victory Kataragama and goddess of chastity Pattini.

The Sacred Tooth Relic which is housed at the Temple of the Sacred Tooth Relic in the city Kandy is being considered and worshiped as the living Lord Buddha. On behalf of this very reason there are daily, weekly and annually poojas and rituals. Dalada Perahera famously known as the Kandy Esala Perahera held in the month of Esala annually is among them. According to the Maha Parinibbana sutta of Deegha Chapter, among few other sacred relics, the four sacred tooth relics remained integral following Mahaparinirvana. Lord Buddha’s left canine tooth out of the four Tooth Relics which was blessed with Sri Saddhamma was brought to Sri Lanka due to the continuous conflicts during the reign of King Mutaseewa in the kingdom of Kaalinga. Princess Hemamala and Prince Dantha brought the Tooth Relic to Sri Lanka during the reign of King Kithsirimewan, seeking protection for the Sacred Tooth Relic.

For Ensuing the arrival of the Sacred Tooth Relic, it was first housed in the Isurumuniya Temple and was honored and worshipped with Dalada Perahera by King Kithsirimewan. It wasimpressivethat it left the King Kithsirimewan and the country men with astonishment. They made it an annual event performed in Anuradhapura kingdom with the anticipation of timely rain and good harvest. The background for the current street stalking Dalada Perahera was set on those conditions. No matter how the king was crowned, if he did not obtain the custody of the Sacred Tooth Relic which has the incredible power of giving timely rain and good harvest in the eyes of the country men he was not considered as the true leader with authority.

The tradition of Dalada Perahera which was based on Buddhist respect and kindness, combined with rituals of Devala forarranging the ultimate humanity. The Kandy Esala Perahera Casket which is considered as living Lord Buddha which parades the streets is worshipped by the divinity, humanity and elephants. This is considered to be the oldest cultural event in the world and continues with its colorful,splendid magnificence making it an out of this world experience as the Grand Pageant of Asia.