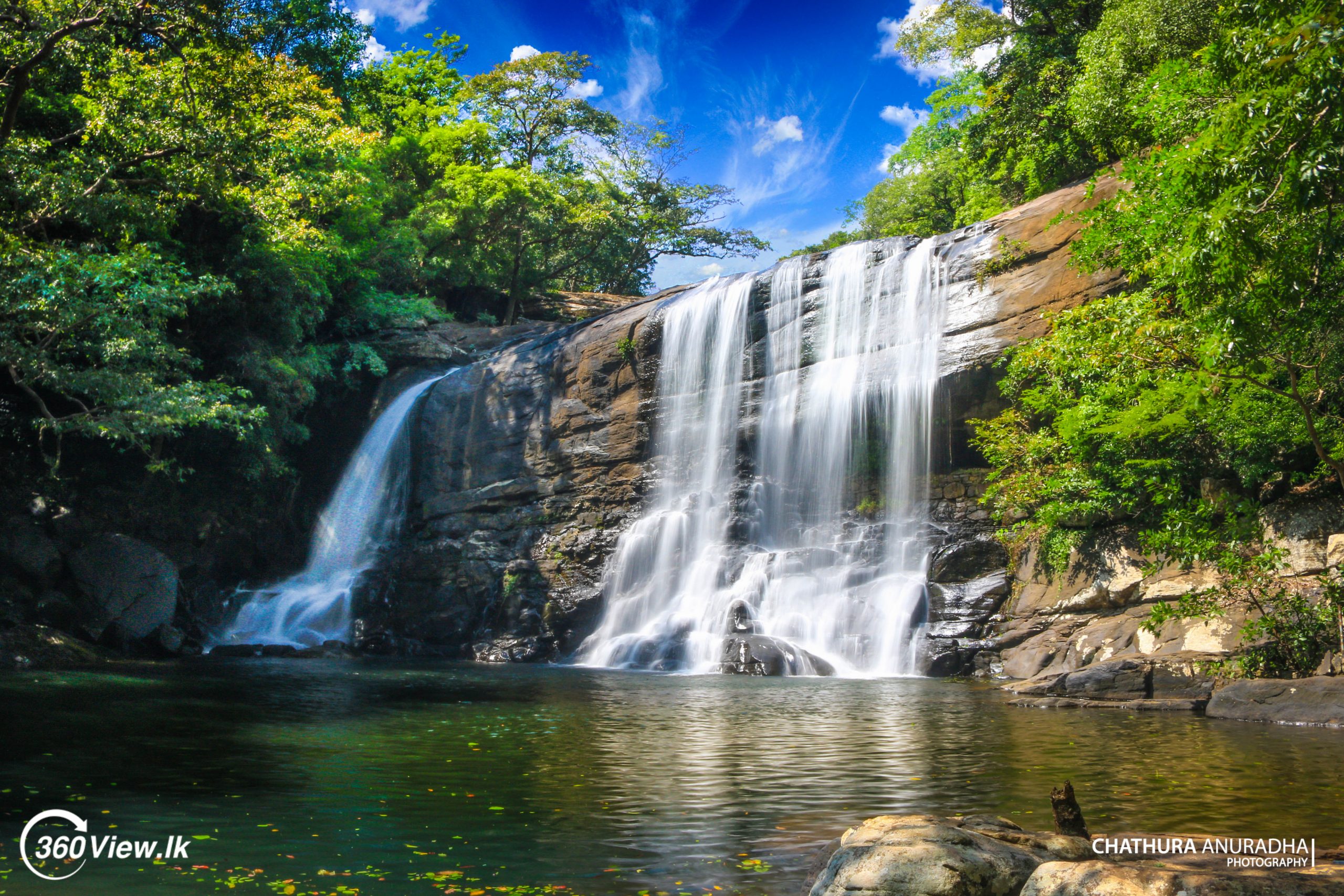 Sera Ella Waterfall in Sri Lanka is a waterfall located in Pothatawela village, a place near Laggala in Mathale District’s, Sri Lanka. It is formed by the waters of Kitul Canal which runs down Kaudagammana Peak and Hunumadala River, a waterway which joins Thelegam River to create the waterfall at its point of joining. The magnificent waterfall split up into two sections as it falls down the rock face, both falling down a height of 10m and which is visible from the Dumbara Jungle. The waterfall obtains water the whole year round and is at full flow during the months of the monsoons; that is, between November and March. The waterfall gets its name from the species of fish that lives in its water, locally known as ‘Sera’.

This pretty and unassuming Water Fall, Sera Ella hides an exciting secret in its midst. A dry but cool caves hidden behind the curtain of water as it flows down the rock face. It can be reached even when the waterfall is in full flow using the steps cut into the rock side. They have a tendency to to be greasy from the misty spray and moss though that care should be taken.

Sera Ella is perfect for a family day outing with the base of the waterfall being good for bathing and a swim. The cave is an amazing place for a picnic lunch and nap out of the sun with the calming roar of the waters and the cool shade of the cave. There are places to discover nearby for the more adventurous too.

The beautiful Sera Ella fall the subject of several poems that is situated in the Dumbara Jungle. It is split into two sections both 10m in height. The Kitul Canal from the Kaudagammana Mountain and the Hunumadala River from the Gonamada and Deyuthu Gammaduwa mountains flow in harmony to form the Puwakpitiya River. This later joins Thelegam River at which point the fall is created as the water tumbles down a protruding rock face visible from Dumbara Jungle.

There are hundreds of little fish, bugs and swarms of colorful dragonflies all over the place, it’s not hard to imagine you’re one of the kids in a Jurassic Park movie and to keep an eye out for sudden dinosaur to make its way through the foliage. Sera Ella is like a little haven though set firmly in between walls of rock and trees on three sides. The pool continues into a river-like waterway through a lot more rocks.

Though the roads aren’t in a good circumstance from Illukkumbura the fall can be reached in any vehicle. Once you pass the Pitawala Pathana which is a concrete road to Puwakpitiya. Entrance to the fall is approx. 8.5 km on this road. From here, you should climb down about 200m on a path to reach the viewing platform. If the vehicle does not have a high ground clearance, you may have to park the vehicle about 1.5 km before the entrance and walk the rest.

Sera Ella is a magical waterfall which is a place in attraction grabbing places in Sri Lanka. It contains lots of natural sources in our environment. If you visit to travel Sera Ella, definitely you’ll wonder as this natural creation in Sri Lanka. And also, all the visitors are kind to keep their minds as protect these natural heritages for our future generation. Let’s feel the nature lover through visiting the Sera Ella!