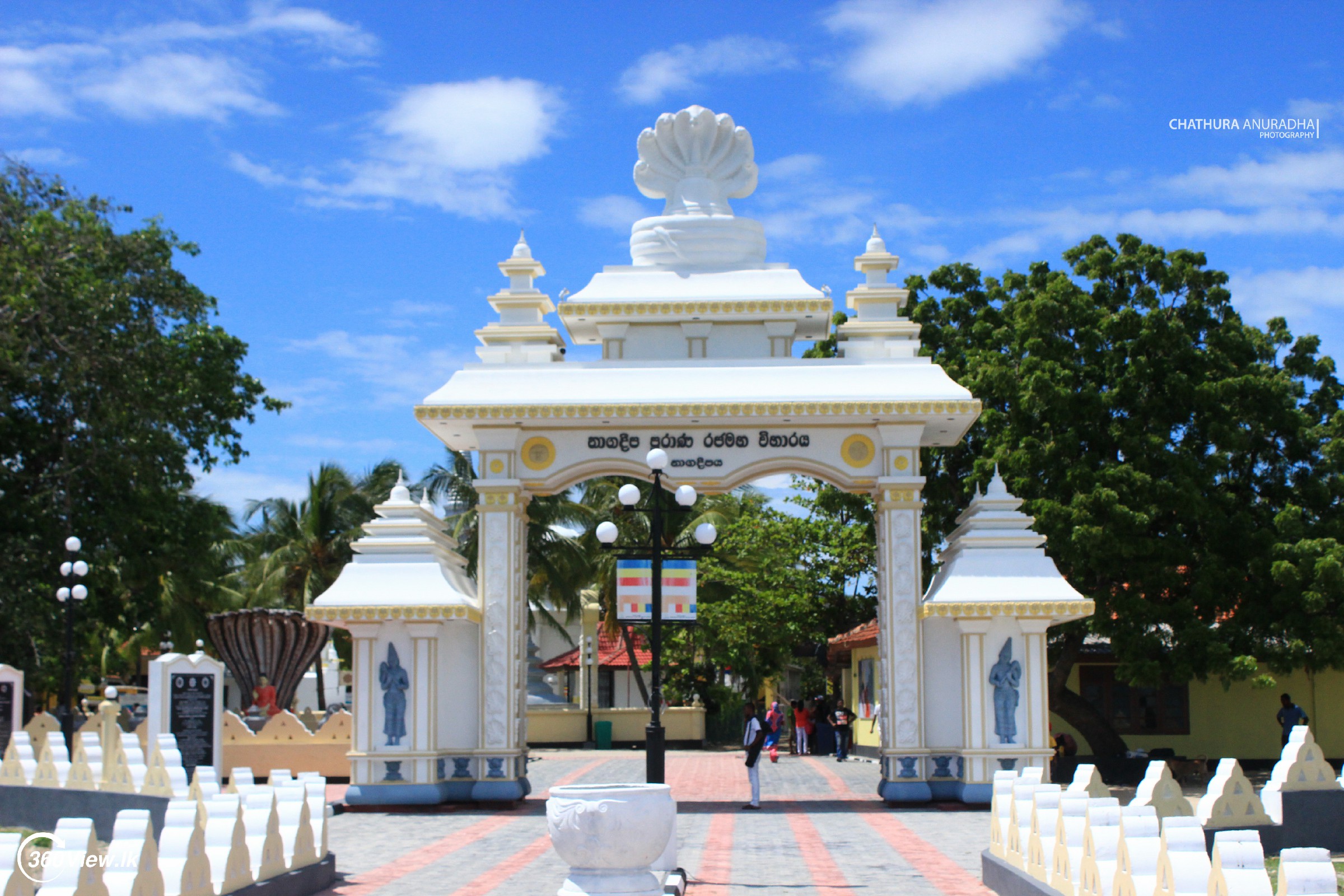 Approximately 35 miles from the coast of India sits the little island of Nainativu in the Gulf of Mannar. People have been coming to this area and the neighboring islands for years to purchase conch shells, which are harvested from the warm shallow waters of the Gulf. Beautiful conch shells with a rightward spiral are in high demand since they are used in religious ceremonies across many faiths, including Hinduism and Buddhism. Since the 1st century CE, Nainativu’s renowned stupa has drawn pilgrims in search of spiritual enlightenment. The island is mentioned in the Tamil Buddhist epic Manimekala and is included as one of the sixteen sacred sites in the Mahavamsa.

Pilgrims from India would visit the stone bearing the Buddha’s footsteps in Nagadeepa Rajamaha Viharaya. The protagonist of the epic is said to have been lost among the “vast sandy dunes and lagoons” of the island. The red and white striped walls of the Hindu temple are easily recognizable as the boat approaches the main jetty (Nagapooshani Amman Kovil ). Despite the fact that a temple has been on this site for hundreds of years, the current structure is neither ancient nor very noteworthy. However, there are two old artifacts, one on either side of the temple’s side entrance. As you enter, there is a massive stone inscribed with Parakramabahu I’s name on the left side of the room. In the first portion of this inscription, the king orders his subjects to assist any foreigners who arrive in need and instructs them to enter the country only through the Uraturai (Kayts) port of entry.

Obviously, this is referring to Indian businesspeople and tourists. The second section details the procedures to follow in the event of a shipwreck involving a commercial vessel, one transporting elephants or horses, or both. An enormous anchor-shaped stone stands to the right of the doorway. Such anchors were commonly carried by ships of the Arab fleet.

It is believed that the Buddha resided in Nagadeepa Vihara, which is located less than half a kilometer down the road from the temple, when he visited the little island. The Bodhi Tree and the silver-painted stupa stand on opposite sides of the road. There are also two temples, one of which houses a bronze Buddha figure gifted from the government of Burma in 1956. Since the entirety of Nagadeepa was constructed in the ’50s, nothing there is of historical or artistic significance.

The history of Nagadeepa Purana Viharaya dates back to only five years following the Buddha’s enlightenment, as has already been established. It was discovered that Maniakkika, Chulodara, and Mahodara were the three Naga monarchs. After Chulodara wed his uncle’s daughter, Mahodara’s, he was given the jeweled throne as a present. The princess had a very early death. After her passing, Chulodara was requested by his uncle to give up the throne, but he declined. As a result, they had a huge argument.

Lord Buddha’s arrival in Sri Lanka was a turning point in the conflict. At an effort to broker a truce, he landed in Nagadeepa (then known as Mahodara’s realm). The two monarchs were so placated by his Dhammas and sermons on unity and peace that they converted to Buddhism. The two rival monarchs brought Lord Buddha an offer of peace by presenting him with their contested throne. The Naga Kings accepted it as a gift from Buddha and enshrined it in the stupa at the Nagadeepa temple. The Nagadeepa Vihara was initially built by King Devanampriya and then enlarged by King Dutugemunu. For Buddhists, it quickly rose to the status of a holy site. Unfortunately, the LTTE tried to harm it during the civil war. A golden Buddha statue was smashed and discarded into the water. The government and the temple’s then-priest, Dhammakitti Thera, worked together to rehabilitate the structure.

Several bombs went off near the jetty in the 1980s. The Navy base on Nagadeepa Rajamaha Viharaya island responded aggressively to threats from the LTTE. Dhammakitti Thera was instrumental in preserving calm and convincing the Navy to withdraw. As a result, underground shelters were constructed for the more seasoned monks, while the junior monks were taught to fight. Following the unrest, the Nagadeepa Rajamaha Viharaya Buddhist temple had to be enlarged to accommodate the growing number of visitors. So, now, from one major stupa, there is plenty more to see at the Nagadeepa Purana Vihara.

The Banyan tree that is next to the Bodhi tree should be avoided. There is a connection between this and other events in Nagadeepa Viharaya. Samiddhi Sumana, a god, traveled with Buddha from Anuradhapura’s Jetavanarama to Nagadeepa (Nainathivu island). It’s theorized that he once made a Banyan tree his home. He turned his home’s tree into an umbrella for the Buddha by uprooting it. Kiripalu Nugaruka is the name given to the sacred tree erected by the two Naga Kings. In fact, the current Banyan tree is said to have descended from this one, making it even more sacred to its followers.

As soon as you enter the Nagadeepa Rajamaha Viharaya, your eyes will be drawn to a silver stupa. It is thought that the jeweled throne has been placed here. All visitors to the Nagadeepa Buddhist temple should make their way to the Rajayanthana Stupa. From what can be gleaned from historical records, the original stupa suffered considerable damage during the many wars that ravaged Sri Lanka. The stupa was discovered in the 1930s and restored to its current state by Ven. Dhammakiththi Tissa Maha Nayaka Thera. The silver finish is there to shield it from the damaging effects of the ocean’s salt and humidity. If you’re interested in seeing the throne, there’s a replica on display.

The Nagadeepa Purana Vihara temple is more than a symbol of Buddhism. Many people see it as a symbol of peace and understanding amongst various faiths and cultures. This becomes clear from the recent past of the Nagadeepa Buddhist temple. As LTTE’s campaign of ethnic cleansing progressed in the 1990s, many Muslims sought safety at the monastery. The Navy sheltered them and established a new tradition for them. The first iftar for the new members of the Navy, the Muslim refugees, would be served by the monks of the Nagadeepa Buddhist temple.