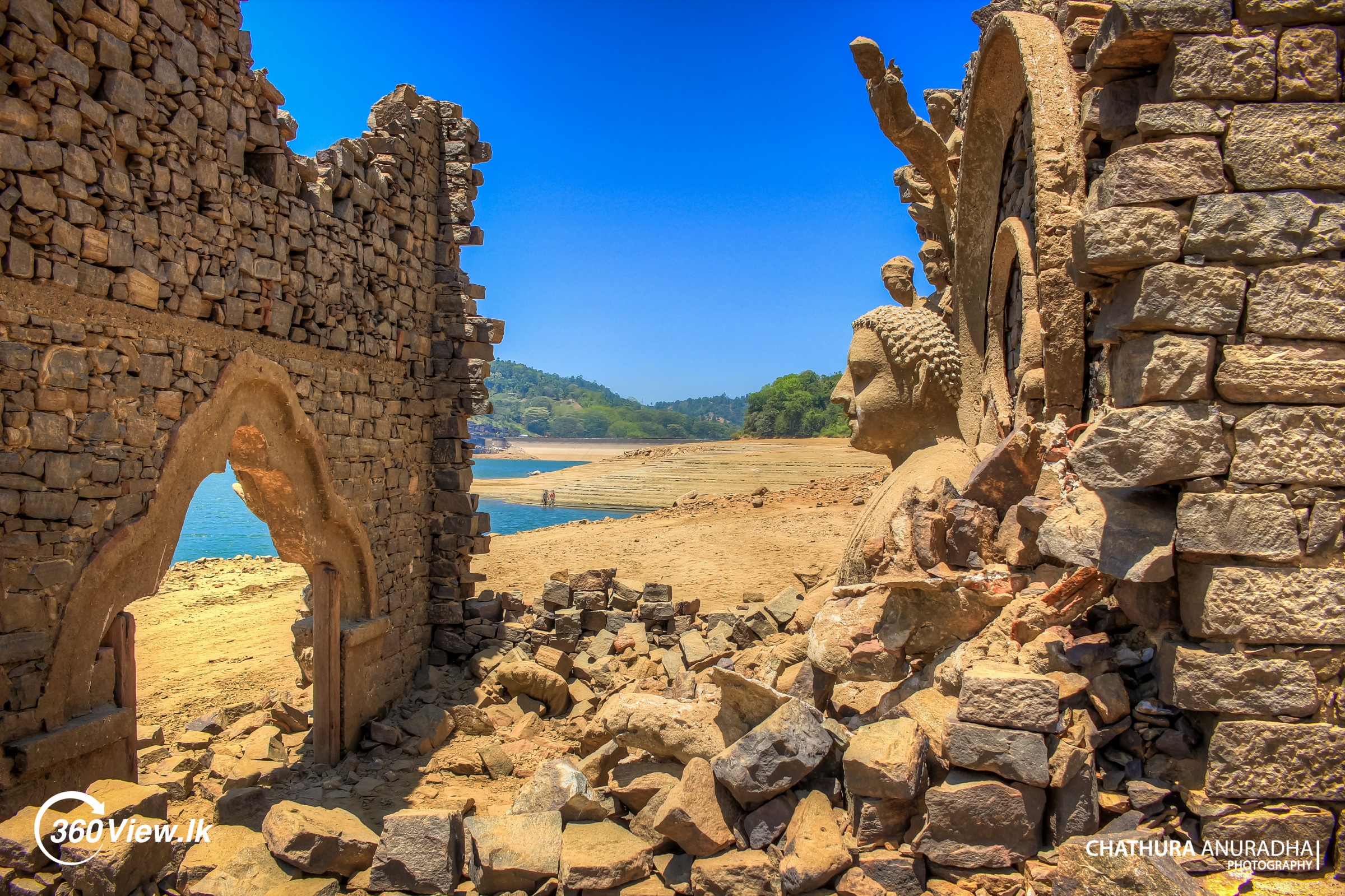 Kadadora Viharaya is named as another name of Kadadora Sri Priyabimbaramaya Viharaya is a Buddhist temple.It is located in Kadadorain Kotmale, Sri Lanka and this is uncontrolled temple.However, It is ruined as the construction of Kotmale Dam by Mahaweli Development programme. It was said that about Inundated by the waters of the reservoir are the ruins of many temples and human settlements. But many of places are not exist at present and even submerged. Still as a miracle Kadadora temple and statues of load Buddha still can see when the water level gets reduced.

When it Rains full of water and out during the drought which isfamousancient temple of the Kadadora Viharaya inundated to the Kotmale reservoir has a crowd of fans.It is a dreamlikeeyesight to behold. Visitors gathering to the reservoir of Kotmale to see the half-visible temple during the drought and wander through the decomposing inwell-designed temple with its historic architecture.

Some enduring images of humanity displaying appreciation which are perfect examples of how life goes on with nostalgic memories of one’s past and during the reservoir bed of Kotmale, recently.Prince Gemunu, who later became King Dutugemunu makes his mark of fleeing from the Ruhunu Rata to the Malaya Rata. Later on,this historically significant region became the land of the Sinhala kings and farmworkers.

The Sinhala villagers built the Kadadora Viharaya in the Kadadora village near Dehedukadulla on the banks of the Kotmale Oyawhich is a main stream of the Mahaweli Ganga and it’s one of the historic locations in Kotmale in Sri Lanka. They would not have had a suspicion even in their wildest dreams that the river would about half a century later that submerge their places of worship. The Kotmale dam is a major reservoir under the Mahaweli Development Program was built across the Kadadora and “Tispane hills” and the people of the inherited villages were repositioned when the temple went under water.

Since the temple construction plays the game of hide and hunt forsubmerged when it rains and out during the drought season making it the name as the hiding temple.Moreover 50 temples were inundated when the Kotmale reservoir was createdinhibiting Tispane and Kadadora hills and amassive pagoda known as the Mahaweli Maha Seya built on the summit of the Kadadora hill superintending the Kotmale reservoir to signify the  religious shrines.

When itsexteriors for visitors come in their hundreds and offer flowers and get blessings. It has become a popular backdrop for selfies now. The villagers of the inundated village have not lost their ties with the temple. In the months of March and April, when the water level is low and the stone built disintegrating temple is visible.They gather around regarding at the majestic remains of the decaying statue of the Buddha forpaying attention to back to a time when the temple called the faithful to prayer.